Dick Daeschner was from Arlington Heights. He entered the U of Illinois in the fall of 1962 and majored in Finance.

Dick was a loyal member of Sigma Rho and served the chapter as pledge trainer for one year. Dick was active in several student organizations including Wa Na See, Sachem, and Skull & Crescent.   And he was a member of the Student Senate for two years and on the Major Committee of Student Senate.

The Illio recognized him for his campus leadership efforts by including him in their segment "Who's Who at Illinois".

Here Dick is shown in the Illio as one of the "Who's Who at Illinois". 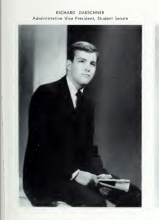 After college, Dick entered the ministry and settled in Wichita, Kansas. 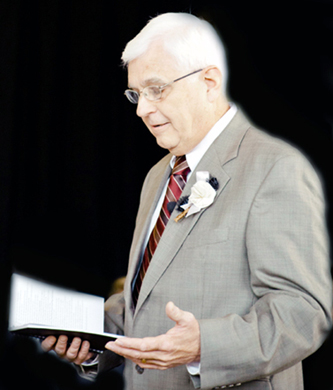 He is remembered in this obituary.

Richard Daeschner lived to further God’s kingdom. Saved by grace as a college student, he entered seminary as a way to learn about the Bible.  There, he made the decision to be ordained and enter a life of full time Christian service. For 20 years Dick joyfully and faithfully pastored Faith Presbyterian Church of Wichita, KS. Here he equipped the saints for evangelism and discipleship through a focus on Bible study and sound theology.  Many people came to believe in Jesus as Lord and Savior through his ministry there and the legacy continues as their children now believe and serve the Lord as well. In later years Dick developed an evangelism training program for ISI and discipled physicians through CMDA. He loved sailing, eating rich foods, long meaningful conversations, going on trips, khaki pants, boat shoes, dancing to the oldies, really fizzy Pepsi, the cool side of the pillow and coming up with unique gifts and activities for his seven grandchildren; and he enjoyed all these things to the glory of God. He was a faithful husband to Edie who he would say was the perfect complement for him in life, family and ministry. They continually opened their home to extended family and missionaries from all over the world. He was a loving and purposeful father to Laura, Susan and Katie. He taught them the scriptures and doctrine and a love for the nations from a young age. It is God who saves and calls us, but Dick Daeschner was the instrument in the lives of many. A memorial service will be held at 3 PM on April 10, 2016 at the First Evangelical Free Church, 1825 N. Woodlawn of Wichita, Kansas. Share condolences at www.CozineMemorial.com. Services by Broadway Mortuary.