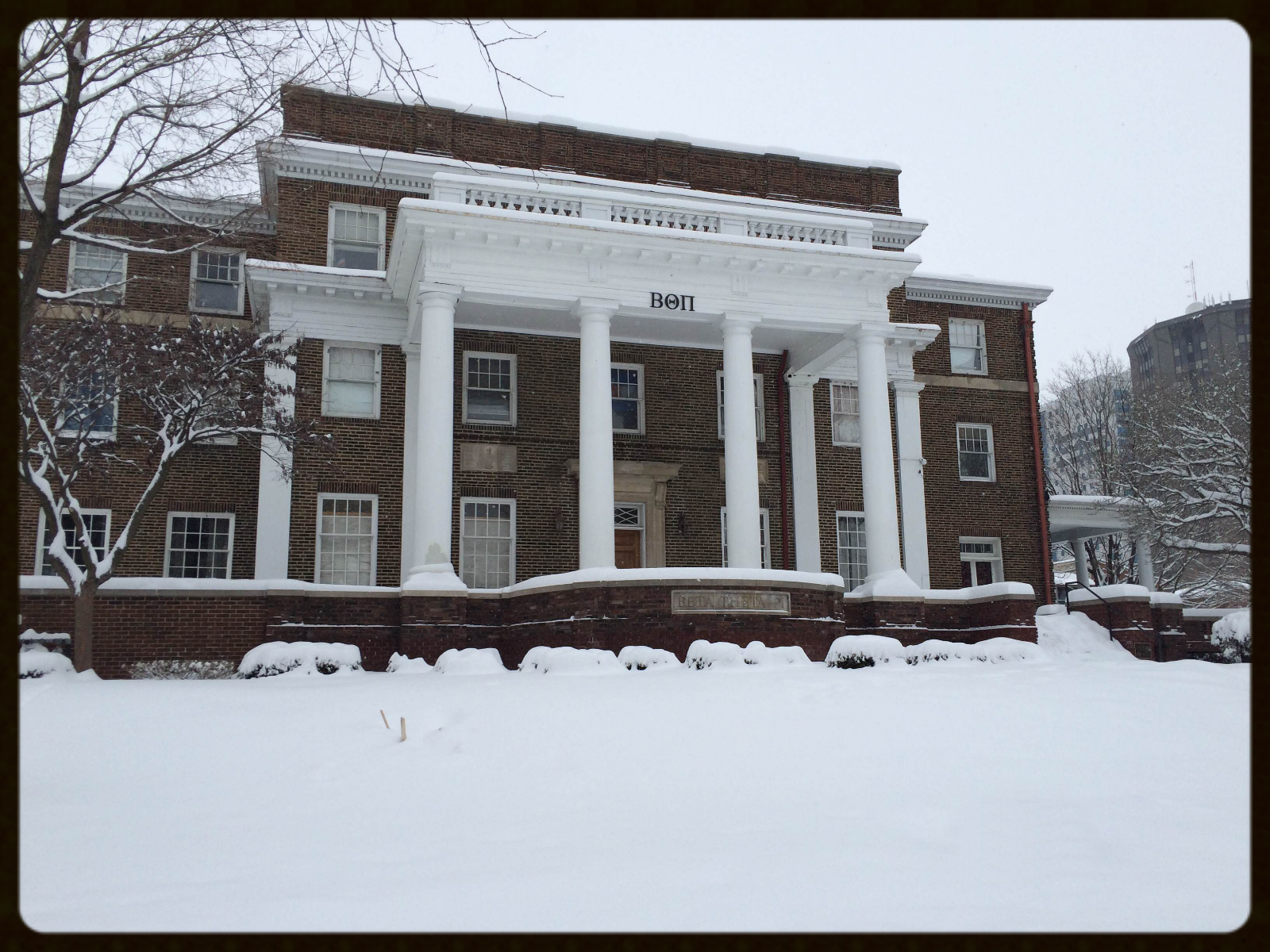 Bad as Winter 2014/2015 was, the House always did look pretty great covered in snow - though I'm sure no one will miss it.

Back from Christmas break for just a week and quickly through the month of February  (and halfway through March) we went. While all of us certainly enjoyed our time spent back at home, I believe I don’t speak for myself when I say that we were all just as excited to be back down in Champaign together. While new classes and professors awaited us as well as maybe one less 8 am class start time, I believe that we were ready to get back into the mix of things and, more importantly, inch closer to leaving this unpleasant winter behind. Though there was little news to cover due to the prolonged school break and gradual transition back into the semester, January’s end and February were still pretty noteworthy of many happenings. This being said, I present to you another combined newsletter for January and February.

Having finished up the final values of responsible conduct and integrity that form our “Man of Principle” initiative before winter break, Sigma Rho’s Beta class could not have been more ready or excited for initiation upon their return to campus. Prior to the resumption of classes, all twenty-six individuals were invited to live in the chapter house in order to complete their new member education as well as gain a feeling for their new lives amongst the chapter’s other sixty-plus members.  This final experience now in hand, each donned his best attire for the main event: initiation.

The evening of Tuesday, January 21st marked the Beta class’ official integration into the Sigma Rho chapter.  Notable not only for the talented men gained, each added signature to Sigma Rho’s roll book also served to bring the chapter’s overall membership to ninety-two brothers. This not only exemplifies that Sigma Rho has made a robust return to the U of I campus but also that we are on pace to once more establishing and preserving the illustrious reputation Illinois Betas are known for.  We commend each and every new brother as well as all of their achievements; we are greatly looking forward to the impact they will now have over the upcoming years of their lives on Illinois’ campus. More importantly, however, we’re just glad we have the fortune of calling them our brothers.

A big congratulations to our 26 newest brothers - welcome to ΣP:

Soon after the Beta class’ initiation, it was once again time to be on the lookout for more talented individuals to join our chapter. Over the course of twelve-plus events in just three weeks time, VP of Recruitment Curt Olbrich ’17 was able to secure a fourteen person strong pledge class for Spring Rush 2015. Representing from California to Chicagoland’s own Naperville and a multitude of academic majors,  these individuals will now begin undergoing the same educational process as the aforementioned Beta class, learning our organization’s history and values as well as the illustrious history of the Sigma Rho chapter. This, of course, is in addition to mingling and interacting with current actives on a casual weekly basis which is something we as a chapter always look forward to. Of the process, Curt says

“Recruitment went very well! I was pleased with a lot of things this past spring [rush], especially that some of the guys rushed us for our reputation; a lot of them had heard of Sigma Rho’s success on campus and with its alumni. I’m definitely looking forward to capitalizing on this spring’s success in the fall.”

With Curt Olbrich ’17 toning down the recruitment initiative until the next rush timeframe, Sigma Rho is now gearing up to host our first major philanthropy event since returning to campus: Weishfest. For those unaware of the organization, it is a non-profit founded by Don and Jean Weishar with a mission to provide assistance and immediate resources to families with adolescents or young adults battling with cancer. More importantly, it is a permanent memorial and testament to Andrew Weishar who, before sadly passing to colon cancer in 2012 in his early 20s, asked his family to “pay forward the kindness, generosity and respect” he and his family had received from the “love and support of thousands of people.” Though the foundation’s flagship event will be July 18th at Standard Bank Stadium in Crestwood, IL (details can be found at www.Weishfest.com), Sigma Rho is hosting our own event (a bags tournament) in Champaign’s Washington Park with the hopes of raising a minimum of $5,000. Leading planning and execution, our very own Kevin Morrison ‘15 is hoping to turn this event into one that is annual and campus-wide:

“The April 25th bags tournament is something we are looking forward to turning into a campus wide event every year. Through it, I hope to raise as much money as possible for the foundation is one that is very close to my heart – I had the privilege to call Andrew a friend and words cannot describe what his fight meant to so many people. Andrew’s brother Dan, who is also my roommate and Executive Director of the foundation, has done an incredible job growing the foundation and positively changing the lives of cancer affected families.”

Chapter progress in IL may be noteworthy, but halfway around the world our Beta brothers are making advances and memories of their own. Unfortunately, my own oversight in the previous November / December newsletter forgot to include two additional brothers who would be heading overseas for the spring semester: Andrew Ross ’16 (who is currently studying in Rome, Italy) and Karim Mohammadali ’16 (who is currently studying in Vallendar, Germany). Between both brothers, over a dozen countries (11 for Karim Mohammadali ’16 alone) have been visited  and thousands of miles of land have been covered in their free time and weekends between class schedules. From Poland and Slovakia to Greece and Ireland, Sigma Rho’s are wasting no time in experiencing all they can:

“Being in Rome for about a month and a half now, I have met so many new people from the world over and made a lot of new friends in my program. Though this program through the U of I has only 53 college students from all over the US, we are attending an Italian school of about 30,000 total students.  I really could not have imagined how much I would be enjoying this experience and how much I now think that everyone who has the opportunity to study abroad should do it. With planned trips to London, Munich, Barcelona and more, this is truly a once in a lifetime experience and I am having so much fun with it!” – Andrew Ross ’16.

“After ending my term as VP of Finance, I took the semester off to study abroad. Currently in Vallendar, everything here moves slowly – a far cry from the fast paced American lifestyle of Champaign. Attending the town’s business school, I hope to gain new experiences that will help me grow more as an individual back in the states as well as meet new people and get a feel for Europe’s various cultures. Going out into the business world and overall world in general requires both academic and personal experience, so what better way than traveling to learn about yourself, others as people, and get delicious food everywhere to boot? After all, its not about where you’re going; it’s about the extraordinary sights you see, captivating stories you hear and beautiful things you learn.” – Karim Mohammadali ’16.

Though we and their families cannot wait to see them again in person, its quite obvious that both Andrew and Karim are definitely enjoying themselves. Way to represent Illinois and Sigma Rho – safe travels guys!

To finish up this update, Sigma Rho would really like to thank our past alums who have generously donated personal pieces and memories of their own Sigma Rho experience back to our chapter home to be enjoyed by current and future brothers to come. Hoping to make 202 E. Daniel a more inviting and home-y place to to visit and live in, VP of Communications Aaron Reinsbach ’17 has made a great effort to reach out to past alums and their families for Beta related items and memorabilia. In turn, we have been lucky and fortunate to receive numerous historical pictures, library materials and numerous other items from Joe Vangsness ’65, Bruce Lyon ’63 and Mike Langan ’82. Coupled with the recently installed house composite above the living room fireplace, our chapter house will only continue to add these personal touches as time goes on. So stop on in during your next visit; you never know what new items you’ll see! 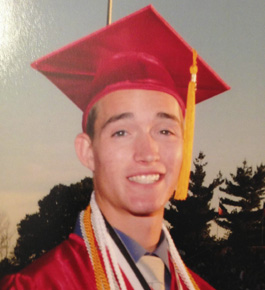 "What was so appealing about Beta during rush was the potential it had. There was a great group of guys in a legendary house with all kinds of traditions and history to go along with it. This being its second year back on campus and the first in the house, I wanted to be a part of re-establishing the Beta name back on Illinois' campus. Definitely felt like a great fit here."

-What you hope to accomplish this year:

"The personal big goal for now is to have an internship over next summer. Additionally, I'm interested in holding an exec position in the house as well. As for Beta overall, I would like to keep on with improving and restoring the house. Block for Fall 2016 would be pretty cool to get too."

"I mean, there's plenty of memories I've made here at the U of I, but the weekend I turned 19 was definitely my favorite." 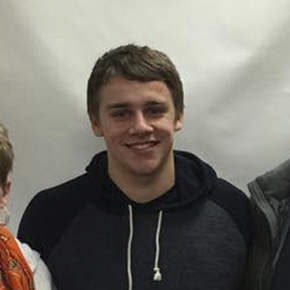 "I chose Beta because when I came around the house during rush, I met several guys who showed me that Beta was different than other fraternities. After I met them, I was told about how the 'Man of Principle' was something upheld by the fraternity which showed me that Betas were devoted to being good people. Also, I was drawn to the opportunity to be a part of building something great."

- What you hope to accomplish this year:

"For next year, I hope to accomplish successfully completing my first round of MCB courses during next year's first semester."

"I would have to say initiation was my best memory so far. I was beyond happy to call myself a Beta and be brothers with everyone in the house."

With Spring break upon us, we are quickly cruising into the final weeks of the academic year. With house, philanthropy, parent and brotherhood events all upcoming as well as the South Padre Island TX trip many of us are taking, we are also ready to finally break out all of our dearly missed summer clothing and put away winter coats for good. Until the next update (which will hopefully have a faster turnaround), my brothers and I wish you all a happy belated St. Patrick's Day. Three days and counting to break!

As always, feel free to contact me for any requested information or questions - I am happy to assist you!
Enjoy the remainder of the week,