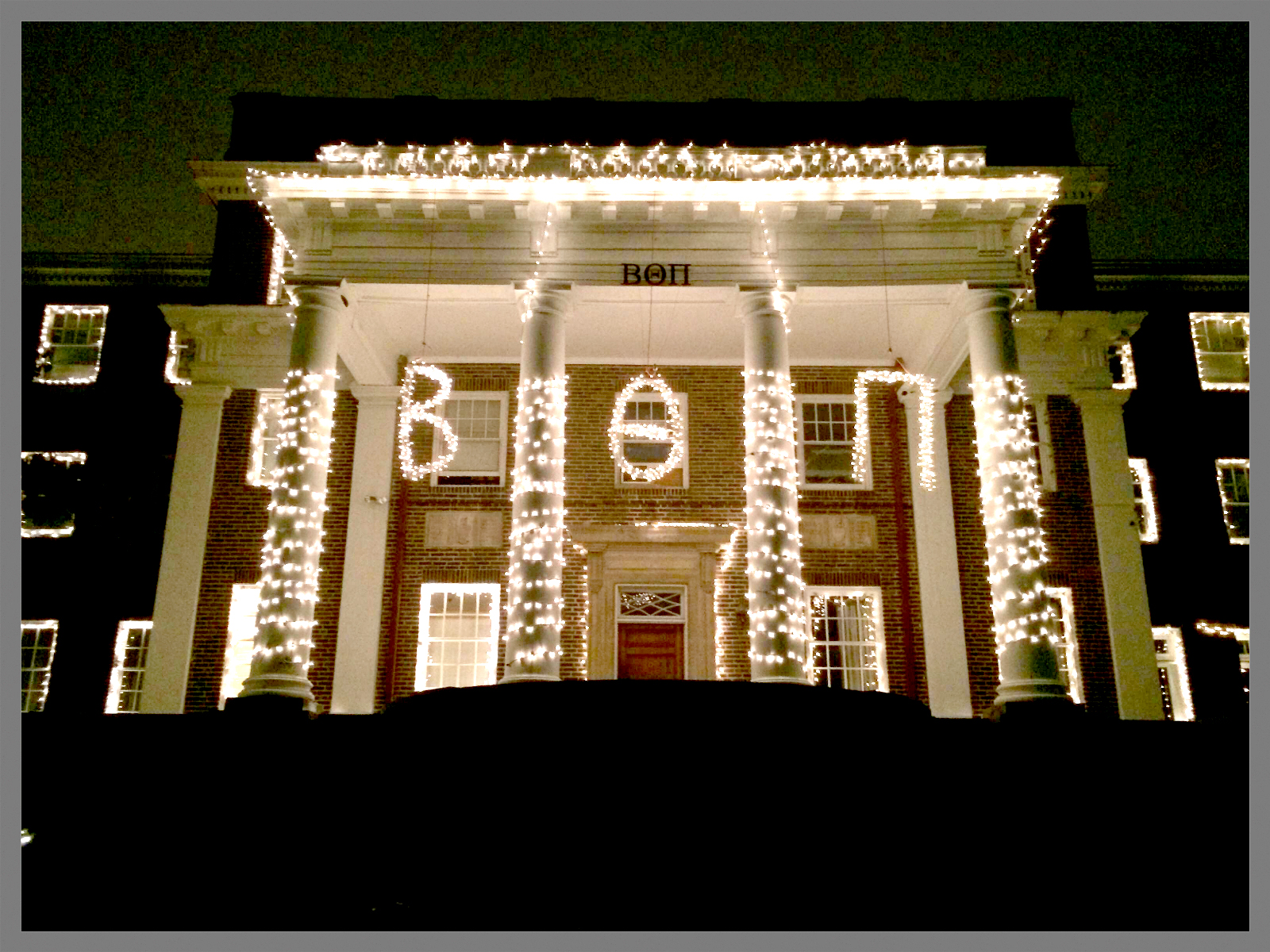 Shine bright! Both current actives and future initiates got in the holiday spirit by decorating the house for the holidays. Clearly, they didn't disappoint.

As some of the most crucial months for any U of I student, November and December kept us Betas determined to finish out the semester strong!  The conclusion of midterm exams brought about Thanksgiving break – a break we all very much enjoyed – which in turn then began the last weeks of the fall semester and final exam preparations.  Though highlighted events are relatively few in comparison to past months because of this (thus explaining a combined Nov. / Dec. update), I nonetheless present to you the Sigma Rho November and December newsletter.

With November’s first two weeks concluding previous officers’ terms, Sigma Rho has held its first official election and instituted a new executive board!  Open to brothers of any class year, all were first presented with the ins and outs of the board and asked to submit their intention in running for a respective officer position.  With aggregated results, each interested individual was acknowledged at our weekly meeting and, contingent on support from the overall chapter, given the opportunity to accept or decline their nominations.  Once accepted, these individuals then shifted into full campaign mode at the following week’s meeting as they delivered impassioned speeches and presented ambitious plans for their selection.  Not wanting to leave anyone out, we even heard several speeches via Skype!  In the end, nine leaders were elected on November 10th who now run the task of guiding Sigma Rho in its next year.

Adds President Izhar: "As the newly elected Chapter President for the upcoming year, I would just like to thank you on behalf of us all for your active interest in our chapter's progress. With the initiation of our first fall pledge class scheduled as we return to campus in January as well as our first philanthropy event being planned for the spring, this next semester will be eventful! Personally, I'm very excited to see how much we can achieve and I hope to earn your continued support going into the upcoming semester."

Best of luck to you all!

While one may consider our first ever held election to be an important milestone, it places a close second to an even more significant one:  the one year anniversary of the Founding Fathers’ initiation at Beta Theta Pi’s national headquarters in Oxford, Ohio!  It is safe to say that few, if any, of us could have expected being where we are now seeing that we were mostly simply strangers to one another when this all began in September 2013.  What’s more, we all possessed a vastly different set of histories, personalities and educational pursuits.  But everyone began engaging so well with one another that, as time progressed, the uneasiness became the brotherhood that exists today.  November 16, 2013 marked the day that Fifty-eight of us made the memorable, schoolbus-chartered trip to Oxford and initiated into something much bigger than ourselves.  Not one of us would change or forget that day forever; we are Beta Theta Pi’s Sigma Rho and we are immensely proud to be.

Concurrent with our one year anniversary was yet another open house event for one of the most important people we know: our Dads.  November 14th – 16th marked U of I’s annual Dad’s Day weekend where all families are invited to campus for sporting events, brunches and music entertainment.  One of the most advertised events of the day, the Fighting Illini vs. Iowa Hawkeyes game brought out larger than normal crowds to Memorial Stadium who, despite the increase in support, were unable to witness a win.  We all may have been somewhat bitter over the 30 – 14 loss, but we all later found solace in our basketball and hockey teams who both posted wins against Iowa and Georgia Southern.  In the mix of all these games was our open house where the families of all active brothers and future initiates could come to meet one another and enjoy casual conversation over lunch.  And as the day fell to night, it was inevitable that many would head to some of campustown’s best hangouts (eg Kams, Brothers, Legends or the like) to get in some last quality time before heading home.  Another event added to 202 E. Daniel’s history, we look forward to hosting Dad’s Day for years to come.

The Marching Illini never fail to impress the crowds. 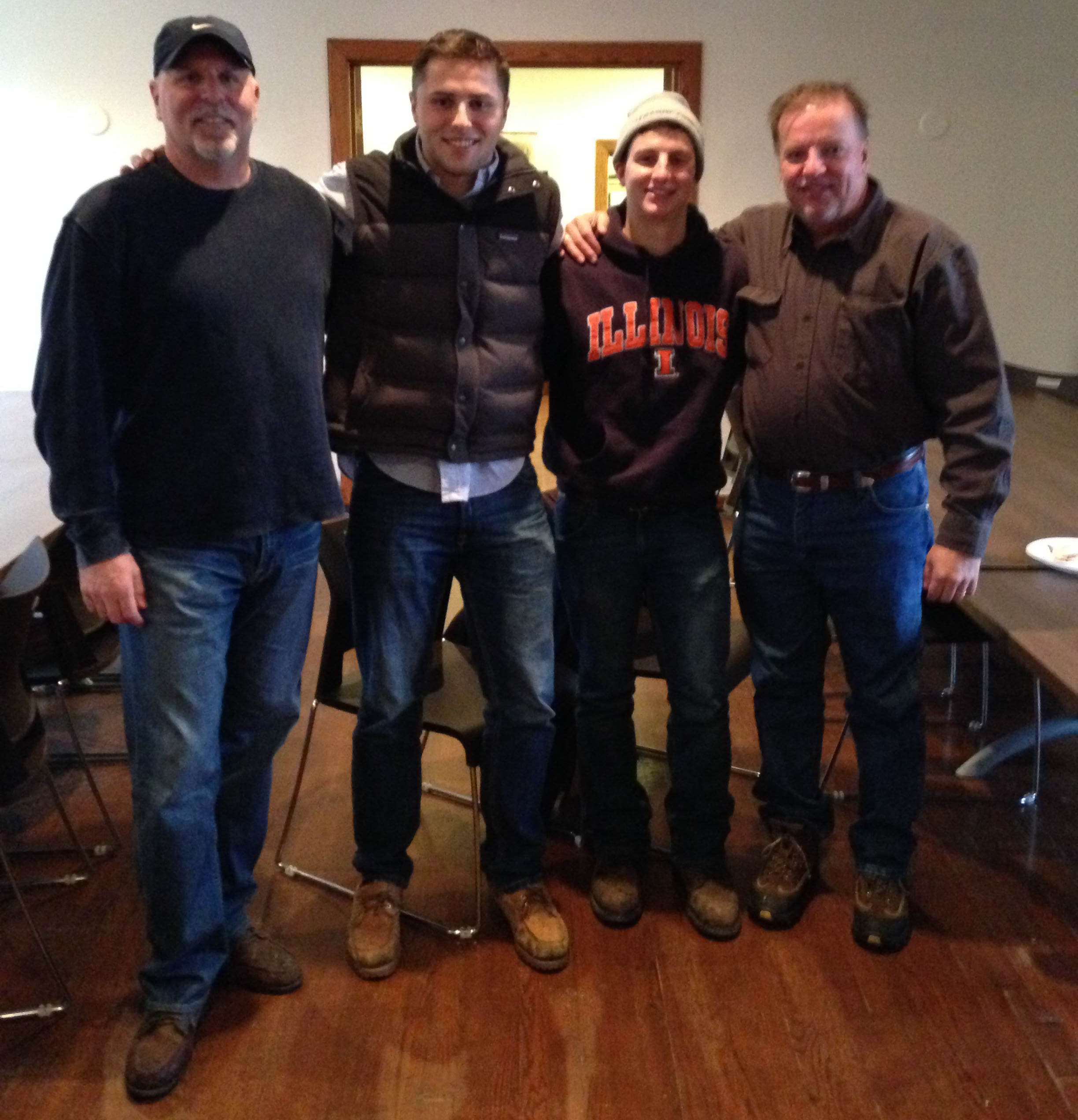 Post game brunch for actives and their visiting families.
L to R: Marty and Kemp DeMarais; J.R. and Rick Domalewski 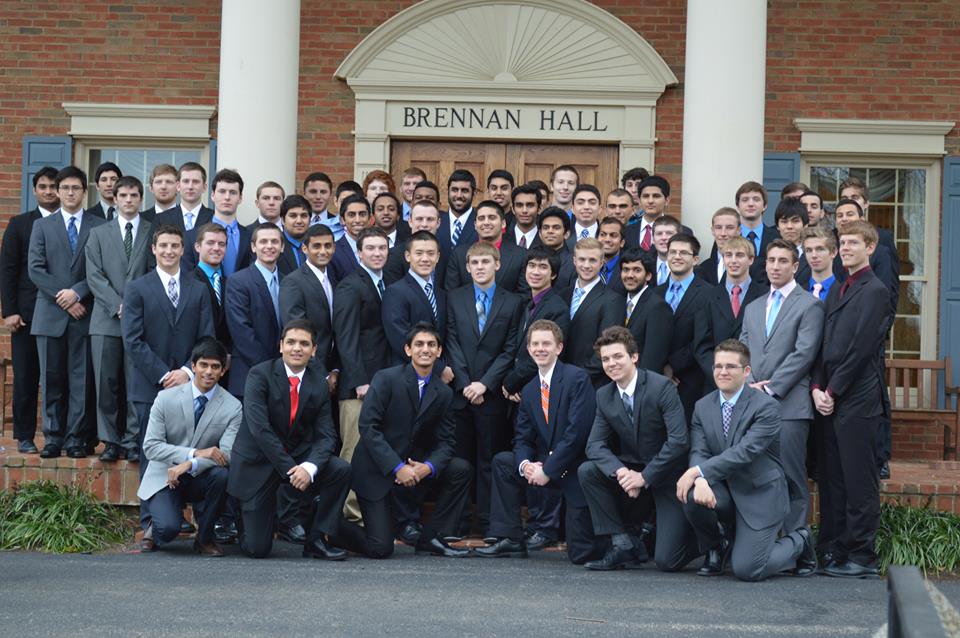 Our semester’s last-biggest social event for the year, December 6th marked the chapter’s very first formal – which could not have been done in a better manner I might add.  Looking our absolute best and ready for the night, brothers and their dates headed up North to Chicago where they enjoyed a few hours of free time before heading to 233 south Wacker drive for the night’s main affair.  For those not familiar with the address, at 233 south Wacker soars the Sears Tower (or more correctly the Willis tower; we Chicagoans or at least myself still refuse to acknowledge this change) and its Metropolitan Club that hosted us for the evening.  Situated on the 66th and 67th floors, all were dazzled by spectacular views of the city and satisfied by finely prepared cuisine before taking to the dance floor to let loose for the night.  We are incredibly appreciative and grateful to the Sigma Rho alumnus for opening up this establishment and allowing us to create such great memories.

Last but not least are the final tidbits that wrapped up the last week of the semester.  Future members continue to be well on track to initiating after winter break, most recently having focused on the final values of responsible conduct and integrity that form our “Man of Principle” initiative.  In addition, many completed service hours over Thanksgiving break with notable charities (Feed My Starving Children being one organization) and have begun to plan chapter-wide projects to improve our house next year.  Turning to current actives, two of our brothers will be capitalizing on some great opportunities next semester by studying abroad!  Connor Murray ’16 will be in Austria continuing his study of political science while Bill Hilger ’16 will be in Germany continuing his study of policy, international trade and development.  Having already given both a proper send off the Friday before Christmas break began, we wish them nothing but the best of luck next semester and can’t wait to have them back next year. Enjoy guys! 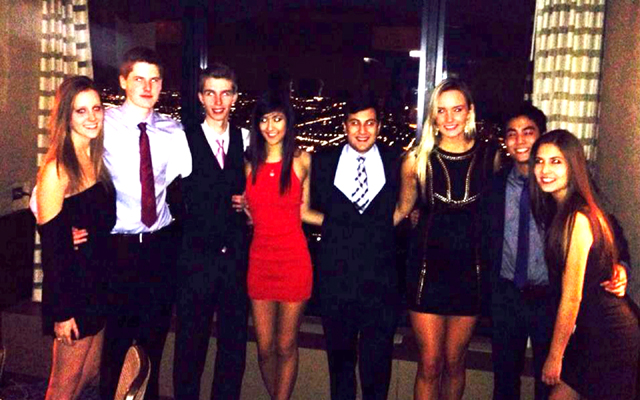 Chicago's Metropolitan Club provided quite the evening for actives, future initiates and their dates. No need to tell us, we all look amazing!

Every time us brothers got together with those traveling abroad next semester was an important sendoff - even if they weren't leaving for weeks! 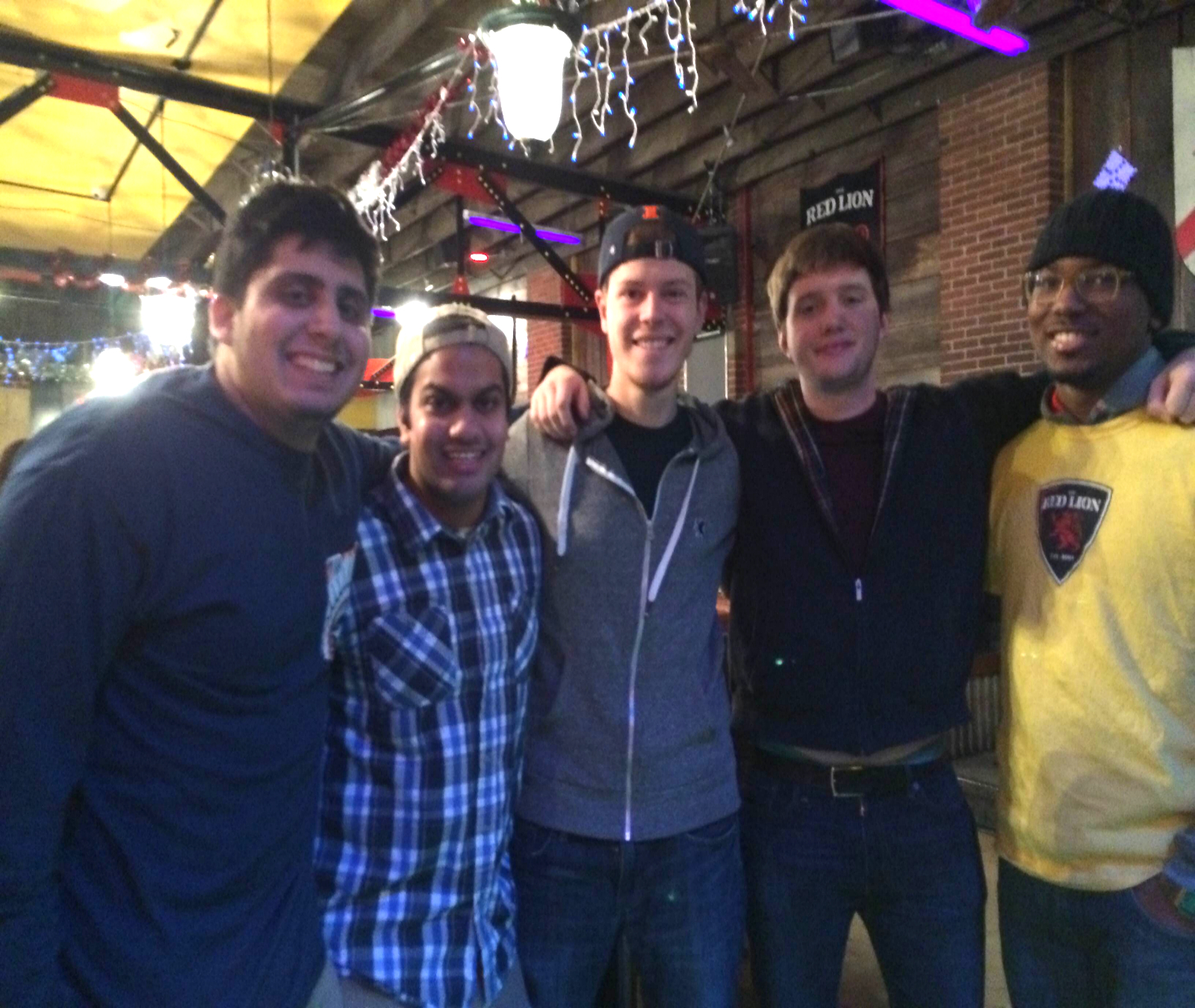 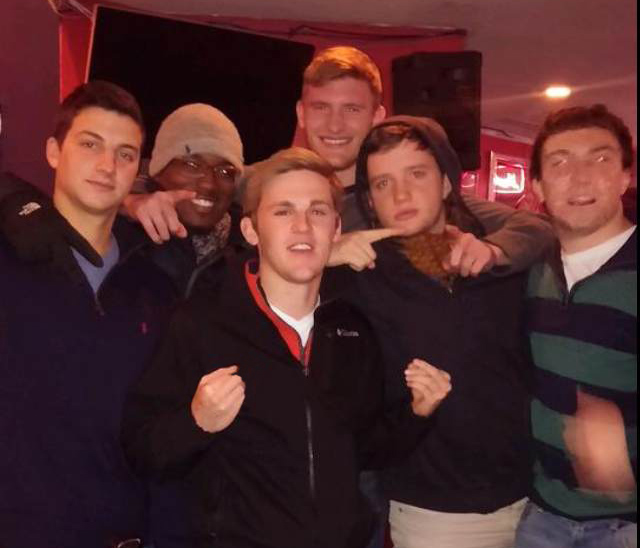 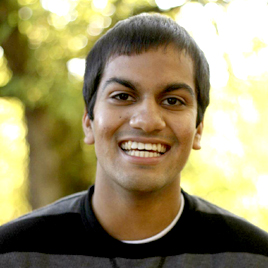 - Why you went Beta:
"I joined Beta for the opportunity to leave a lasting legacy on campus by building off an already great foundation."

-What you hope to accomplish this year:
"As House Manager I hope to make the chapter house a landmark on campus and a place actives and alumni can enjoy being in."

- Best memory of UIUC / Beta thus far:
"My favorite memory has been the alumni events we have had so far!"

- Why you went Beta:
"After transferring from my local community college to UIUC in fall 2013, I didn't know alot about Greek life and never thought about joining a fraternity since I was a junior. My hometown friends TJ Mayer and Bill Hilger then talked to me about Beta and asked if it was something I would be interested in. I was hesitant at first, but after going to a few rush events I realized that this was something I would love to be a part of."

- What you hope to accomplish this year:
"I hope to establish Beta's philanthropy event this spring, continue growing personally and professionally [and ultimately] attain a full-time offer from a public accounting firm. After graduating in the spring, I also plan on being back in the fall of 2015 to start my masters in accountancy."

Best memory of UIUC / Beta thus far:
"My favorite memory and most beneficial part of Beta has been the relationships I have formed over the past year. Coming from the Southside of Chicago, I have never been introduced to people from different backgrounds than mine. Beta has given me the opportunity to become friends with not only people from across the nation but also the world."

Having said all of the above, we now find ourselves nearing the end of 2014.  Just a few months ago, I found myself struggling to list what we had been up to to write these newsletters.  Now, I struggle to condense it enough that it isn’t too taxing to read!  This tells me that your support coupled with our drive and overall persona as a chapter has allowed us to thrive – in establishing relationships with professional / Greek organizations on campus and our alumni base to meeting and/or exceeding all the goals and expectations we set for ourselves and (hopefully!) you as our parents.  So on behalf of my brothers and I, we wish you nothing but the safest, most fulfilling holiday season with all the best happiness, health and wealth to come in 2015. Happy New Year!

As always, feel free to contact me for any requested information or questions - I am happy to assist you!

Copyright © 2014 Illinois Beta Theta Pi, All rights reserved.
This is the official parents newsletter of the Sigma Rho chapter of Beta Theta Pi.